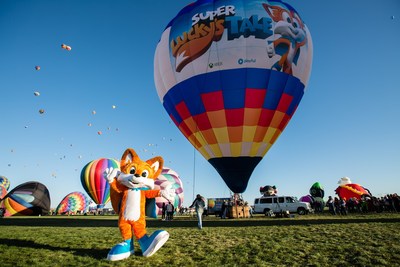 “What better way for us to showcase the fun and adventure of Super Lucky’s Tale than to take flight at an event filled with imagination and on top of that set a GUINNESS WORLD RECORDS title,” said Aaron Greenberg, GM of Games Marketing at Xbox. “The fact that we livestreamed this on Mixer live from the hot air balloon was a fun first-of-its-kind challenge for us!”

The livestream, hosted by Rukari Austin, Community Manager at Microsoft Studios, took place in a custom-wrapped balloon with a built-in platform that housed the Xbox One X and a screen which was powered by a generator while in the sky. In addition, two Blackmagic micro cinema cameras were used to film the livestream. While the livestream itself also used a bonded 3G/4G cellular networks. These elements were mounted and secured inside the Super Lucky’s Tale balloon gondola which families watched soar through the sky and make history.

Super Lucky’s Tale is a delightful, playground platformer for all ages that follows Lucky, the ever-optimistic, energetic, and lovable hero, on his quest to find his inner strength and help his beloved sister rescue the Book of Ages from Jinx. Jinx is the scheming and mysterious villain trying to reshape the world, but for what reason? The game will be available worldwide on November 7 as an Xbox Play Anywheretitle (Xbox One family of devices and Windows 10 PC versions included with single digital purchase at no additional cost).