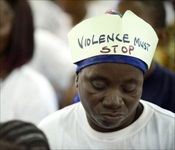 No region “immune” from violence against women
Women in all parts of the world are being subjected to sexual violence according to the UN Office on Drugs and Crime (UNODC). It can take many forms such as domestic abuse, human trafficking and rape as a weapon of war. The reasons behind that violence can vary from region to region, but social, cultural and economic factors generally play an import role. Jorge Miyares has been speaking to Claudia Baroni, who works on the issue of violence against women at UNODC. He began by asking her for an overview of the situation across the world
Investing in gender equality

More money must be spent in key areas such as education and health care in order to enhance gender equality, says the United Arab Emirates’ ambassador to the UN. Lana Nusseibeh presented key findings from the UAE on how best to promote gender equality in the new development goals being elaborated by the international community. It’s expected that funds will be focussed on areas such as early or child marriage, violence against women and a lack of access to sexual and reproductive health. Cathrine Hasselberg began by asking Ambassador Nusseibeh for an explanation of what finance for gender equality entails.
Girls are where’s IT’s at for global tech event

The lack of women working in new technology must be reversed, the International Telecommunications Union (ITU) said at the start of a global event to change the status quo. ITU’s Girls In ICT Day event – now in its fifth year – aims to encourage more girls to consider a tech career, with more than 140 countries and more than 110,000 schoolgirls taking part. The UN agency’s Doreen Bogdan-Martin explained to Daniel Johnson why it’s important to show girls that working in tech science can be exciting and have a positive impact on people’s lives.
Presenter: Stephanie CoutrixProduction Assistant : Sandra GuyDuration: 10’00”

HALO to Exhibit at ADIPEC 2016, the World’s Most Important Oil and Gas Exposition and Conference