CHENGDU, China, July 24, 2019 /PRNewswire/ — On July 23, “2019 The 2nd World Cultural Capitals Tianfu Symposium” sponsored by Chengdu Municipal People’s Government and organized by Chengdu Media Group was unveiled in Chengdu. Representatives from 21 member cities of the World Cultural Capitals Symposium from 42 countries and regions around the world, and representatives from 11 key cities along “the Belt and Road”, as well as over 300 representatives of well-known cultural creativity organizations and cultural celebrities gathered in Chengdu, China, to discuss cultural development and city opportunities. 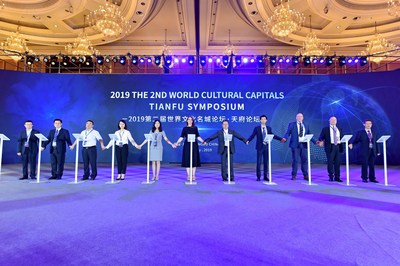 For the first time, the Symposium released the World’s New Growth Cities Charm Index on Cultural Creativity report, which was commissioned by Nielsen, a world-renowned data and research company. The report takes six dimensions of city economic power, city consumption power, cultural soft power, innovative leading power, talent gathering power and international influence as its charm index on cultural creativity, and constructs an evaluation index system to measure the city culture and innovation development. According to the report, Chengdu is a city that combines culture and innovation and will become one of the fastest growing cities in the world in the next ten years.

At the scene of the Symposium, the “Tianfu Smart Media City Project” was officially launched to the world. It is reported that Tianfu Smart Media City is a world-class smart media industry cluster built in Chengdu by Chengdu Media Group, with the world leading Media City UK of Manchester and Dubai Media City as benchmarks. The project site has been confirmed as located in Singapore-Sichuan Hi-Tech Innovation Park and Chengdu High-tech Zone. It will be developed step-by-step in 3-5 years.

At the same time, a “Hand in Hand” campaign for museums is jointly launched at the Symposium by Rotterdam Museum in the Netherlands, Tate Modern in London, Dunhuang Academy China, Liangzhu Museum (Research Institute) and Wu Hou Shrine of Chengdu. The campaign aims to strengthen the exchanges and cooperation among international museums, build a community with a shared cultural future of various countries and promote global cultural prosperity.