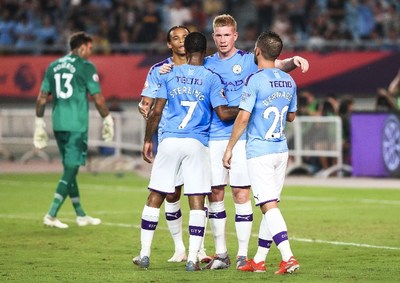 Stephen HA, VP of TRANSSION HOLDINGS and GM of TECNO Mobile said: “TECNO feels much honored that our brand has been with City players all through this Asia tour. We witnessed three victories and 13 goals scored in City’s four games during their two-week Asia tour. Congratulations to City.”

Win-win cooperation for the ultimate success

TECNO has co-operated with Man City for a long time. As early as December 2016, TECNO signed a cooperation agreement with Manchester City Football Club and became the Official Tablet and Handset Partner of Man City, embarking on the journey of “win-win cooperation”. At the TECNO global partnership summit held in India on July 10, a strategic cooperation signing ceremony was held to announce the renewal of the global partnership between TECNO and Man City. As the strategic partner of Man City, TECNO is committed to bridging the gap between brand and consumers, and sharing with football fans every touching and exciting moment.

As pioneers in their respective fields, Man City is beloved by football fans all over the world, while the TECNO brand of TRANSSION wins the affection of mobile phone consumers in emerging markets across Africa, South Asia, Southeast Asia, Middle East and South America. The two parties have numerous in-depth cooperations based on events, products, brand marketing, and many other areas. A unique consumer experience was made possible by jointly selling Man City’s customized CAMON CX. High-quality themes were jointly created by exploring brand commonalities. A series of interactive marketing initiatives with “Man City wins the championship” as the topic was selected into Twitter’s global database of successful cases. The annual TECNO BlueSquad youth training meeting was jointly held to help the cultivation of young football talents through sports resource integration. The three-year in-depth cooperation has proven to be a great success. Brand image and reputation of TECNO have been greatly improved. Exciting outcomes have been achieved by TECNO in terms of sales and brand influence.

Glory and success, the road of going abroad for a technology brand

As Man City’s winning spirit is shown in each field to fight match by match without fear for challenges, TECNO is making continuous efforts to forge ahead in the broad emerging markets. With star products that are highly customized for the needs of local consumers, TECNO Mobile continues to be the top-selling mobile phone brand in Africa. Its brands have been listed in the Top 100 Favorite Brands of African Customers multiple times. TECNO ranked No.5 in the 2018/2019Top 100 Favorite Brands of African Customers released by the well-known African Business magazine. It’s the best ranking on the list for Chinese brands over the years.

When going abroad as a technology brand, TECNO is dedicated to transforming state-of-art technologies into localized products under the guideline of “Think Globally, Act Locally” and cooperates with powerful partners to enhance communication with consumers, achieve brand upgrading, and win recognition and affection of more consumers around the world. TECNO has become a major global smartphone player with sales networks in over 60 countries and regions.