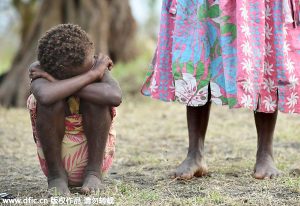 A young boy squats next to an elder while a group of villagers listens to information given to them at the Enima Evacuation Centre on Tanna Island, Vanuatu, March 19, 2015. More than 100 homeless people live in the evacuation center, with humanitarian aid is still to reach the Island since Cyclone Pam hit the region on March 14. The Vanuatu islands were the hardest hit when Tropical Cyclone cyclone began ripping through the South Pacific. [Photo/IC]

A victim is being evacuated by rescue workers outside the Bardo museum in Tunis, Tunisia, March 18, 2015. Gunmen opened fire at the national museum in Tunisia’s capital, killing 22 people including 20 foreign tourists. [Photo/IC]

A girl with Russian national flags painted on her cheeks takes part in celebrations marking the first anniversary of the Crimean treaty signing in central Simferopol, Ukraine, March 16, 2015. [Photo/Agencies]

Thousands of people protest in Frankfurt against the official opening of the ECB, Frankfurt, Germany, March 18, 2015. [Photo/IC]

A boy with shamrocks painted on his face watches the St Patrick’s Day festivities in the city of Londonderry, northern ireland, March 17, 2015. [Photo/Agencies]

Soldiers of the Independent Operational Purpose Division (ODON) participate in a dress rehearsal of the Victory Day parade in Moscow, Russia, March 17, 2015. [Photo/IC]

A woman holds a placard during a march to mark the International Day for the Elimination of Racial Discrimination in London, on March 21, 2015. [Photo/Agencies]

Mayor of London Boris Johnson joins Kew Garden’s horticulturists to plant waterlilies and lotus in the Princess of Wales Conservatory of Kew Garden in west London, on March 16, 2015. [Photo/IC]