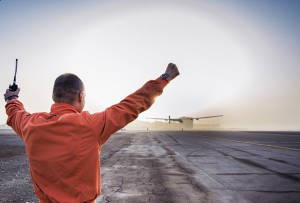 Solar Impulse 2 successfully landed in Muscat, Oman on the first leg of the historic Round-The-World Solar Flight after a 13-hour flight, with André Borschberg in the pilot’s seat. The Solar Impulse team says via Twitter that  Bertrand Picard will take the controls on the second leg, which is an attempt to set a new aviation record, and will take the silver airplane from Muscat (Muscat International Airport, MCT/OOMS) in the Sultanate of Oman, to Ahmedabad (Sardar Vallabhbhai Patel International Airport, AMD/VAAH) in the Republic of India.
Bertrand Picard, pilot and co-founder of Solar Impulse, will fly the solar powered airplane for about 1465 km (791NM, and 910 miles) for an estimated time of 20 hours. The historic port of Muscat is the ideal location to set Si2 up for its first sea crossing onwards to Ahmedabad.

Before taking off for its second flight from Muscat, Oman, to Ahmedabad, in the Republic of India, the Solar Impulse team performed a pit-stop, when the aircraft was cleaned and checked before the next flight. It was also the opportunity to spread Bertrand Piccard’s and André Borschberg’s message about clean technologies.

The Solar Impulse team added:  Bertrand Picard is putting his parachute on for cases of emergency!” And: “Today, Bertrand Picard will attempt to make the longest flight a solar airplane has ever made in terms of duration!”
Keep up on clean energy news & inspiration with our free weekly newsletter!

Bertrand Picard said: “I am really happy to fly! I have been waiting for this flight for a big part of my life.”
Before taking off for its third flight from Ahmedabad (VAAH) in the Republic of India, to Varanasi (VIBN) in the Republic of India, Solar Impulse says the team will prepare the aircraft and pilot. It will also be the opportunity to reach out to governments, NGOs, universities and schools to spread Bertrand Piccard’s and André Borschberg’s message about clean technologies.
Photo Credit: #Si2 with André Borschberg on board took off at 07:12 UTC+4 in #AbuDhabi for #Flight1 to #Oman! via Solar Impulse
You may also want to check out:  Solar Impulse 2 Leg #1: Abu Dhabi (UAE)-Muscat (Oman)-VIDEO
By Amber Archangel