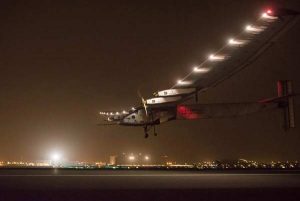 “Solar Impulse 2” descends to land in Muscat March 9, 2015. [Photo/Agencies]
MUSCAT — The globe-trotting Solar Impulse 2 (Si2) landed in Muscat Monday, touching down silently on the runway following a trouble-free 12 hour first leg flight from Abu Dhabi, UAE.
The landing marks the completion of the first leg of the global circumnavigation for the innovative solar-powered aircraft. The Si2 pilots emerged from the flyer to be greeted by a welcoming reception.
Piloted in turns by Bertrand Piccard and Andre Borschberg, the Solar Impulse is designed to fly continuously day and night powered only by sunlight collected by solar cells and stored as electricity in onboard lithium batteries.
The ground-breaking aircraft will travel to 12 countries in an historic attempt to fly around the world without using a drop of fuel, travelling approx. 35,000 kilometres.
The Solar Impulse project is the fruit of 13 years of research and testing by co-founders Bertrand Piccard and Andre Borschberg, two Swiss pilots whose idea was initially thought to be an impossible dream.

Pilot Andre Boschberg (R) chats with pilot Bertrand Piccard after Boschberg landed “Solar Impulse 2” in Muscat March 9, 2015. [Photo/Agencies]
“We are proud that Muscat International Airport is the first stop for the Si2, the solar powered aircraft considered to be a provotal step towards a more sustainable environment-friendly future with the use of clean energy,” Sayyid Shihab bin Tariq al-Said, Advisor to Oman’s Sultan Qboos and Chairman of the Research Council noted at the wecoming reception.
“I hope the Si2 will motivate the next generation of Omanis to be more creative and innovative in order to develop our vision for the future,” he added.
Commenting on the safe completion of the first leg of the circumnavigation, Bertrand Piccard, co-founder and co-pilot of Solar Impulse flyer noted, “With our attempt to complete the first solar powered round-the-world flight, we want to demonstrate that clean technology and renewable energy can achieve the impossibility.”
Safely secured on the tarmac at Muscat International Airport, the next leg of the Si2 adventure will see it cross the Gulf of Oman heading onwards to India and Myanmar. After travelling around the globe, Si2 will arrive back in Abu Dhabi late July or early August.
The adventure is expected to take approximately 25 flight days spread over five months, with the aircraft travelling at the highest speed of up to 100 kilometres per hour.
The Si2 was completed in April 2014 and has 17,248 solar cells built into its wings, which supply four electric motors.
Pilot Andre Boschberg (C) poses for a photo with a local man after he landed “Solar Impulse 2” in Muscat March 9, 2015. [Photo/Agencies]