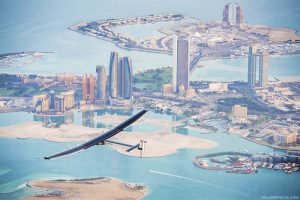 In advance of Solar Impulse 2 (Si2) taking to the skies over Abu Dhabi in route to Muscat, Oman on the first leg of the Round The World solar flight, the  Solar Impulse team says H.S.H. Prince Albert II of Monaco, His Excellency Dr. Sultan Al Jaber of the UAE and Richard Branson joined Bertrand Piccard and André Borschberg, pilots and co-founders of Solar Impulse, to launch the movement #FUTUREISCLEAN one day before take-off.
The Si2 team continues, saying: Yesterday morning in Abu Dhabi, ahead of  the departure of the First Round-The-World Solar Flight, starting Monday morning March 9th at 7:30 am (GMT+4), Solar Impulse 2 launched the #FutureIsClean movement to gather worldwide support for the use of clean energy.

Only a significant support will push governments to replace old polluting technologies with clean and efficient technologies. This is what we want to create throughout our solar powered Round-The-World Flight. If there are technological solutions to fly a plane day and night without fuel, imagine the potential of these technologies in our daily lives, to achieve energy savings and reduce CO2 emissions. This would help create jobs, develop new industrial markets while also protecting the environment. –Swiss Explorers Bertrand Piccard and André Borschberg, Solar Impulse founders and pilots.

We need to encourage those negotiating on our behalf to be bold and make 2015 the year where we stop damaging our planet. The future is now and the future is you. Tackling climate change is the biggest adventure of the 21st century. Be part of the #FutureIsClean generation. –Adventurer, Philanthropist and Virgin Founder Richard Branson.

The platform  FutureIsClean.org, was designed with the support of our Official Internet and Technology partner, Google, and aims to mobilize individuals, organizations, celebrities and politicians to confront the Conference on Climate Change of the United Nations (COP21), which will define the new Kyoto protocol in December 2015 in Paris. The goal is to establish the largest petition ever created to convince governments to implement technological solutions that are necessary. Every site visitor is asked to add their voice to the message “I want concrete solutions for a clean future” and share among their networks.
Keep up on clean energy news & inspiration with our free weekly newsletter!

Several pages of the site will be dedicated to organizations and influential personalities that are joining the movement such as Solar Impulse’s long-term supporters H.S.H. Prince Albert II of Monaco and Richard Branson, Masdar, Irena, New 7 Wonders and Green Cross International. A global ranking is going to be organized within the community in order to valorize the actions realized by its participants: Invitation of friends, sharing on social networks, sending of photos, and promotion of the hashtag #FutureIsClean.
Photo Credit: Solar Impulse 2, RTW First Test Flight AbuDhabi, Stefatou 26 via Solar Impulse 2
You may also want to check out:  André Borschberg to Fly 1st Leg of Solar Impulse 2 RTW-VIDEO
By Amber Archangel