The Grucci/SKYMAGIC team returned to the skies of Marjan Island, waved goodbye to 2019 and delivered a Guinness World Record for a never-before-seen PyroDrone™ performance. 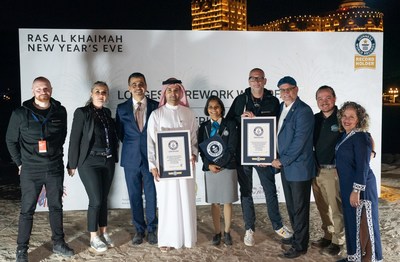 SKYMAGIC, one of the world’s leading performance drone companies, helped to deliver a ground-breaking pyrotechnic drone show designed by Phil Grucci and realised by Fireworks by Grucci and SKYMAGIC. The Ras Al Khaimah NYE show marked the debut of a new generation of performance drones and a brand-new offering to the world of live events.

Marjan Island more officially known as ‘Ras Al Khaimah’ is renowned for hosting large-scale celebratory events for the nation and world to see. This was the second time Fireworks by Grucci had invited SKYMAGIC to collaborate to deliver a stunning series of light shows combining both pyrotechnics and the newly innovated PyroDrone™ performance technology.

This year saw the return of the light show leaders – SKYMAGIC and Fireworks by Grucci, with a synchronised swarm of 196 PyroDrones™ launched high into the night sky for all of Marjan Island to see. The visual extravaganza broke a world record for the ‘Most Unmanned Aerial Vehicle (UAV) Launching Fireworks Simultaneously’. PyroDrones™ are a new generation of drones conceived by Fireworks by Grucci and developed through a collaborative effort between Grucci and SKYMAGIC.

The New Year’s Eve spectacular was visible from over 1km away, allowing the entire Island to view the mesmerising, world-record show. Creative Director of SKYMAGIC Patrick O’Mahony commented, ” It has been quite a journey and we are delighted with the end result. And a Guinness World Record! It is important to keep innovating and what better people to do that with than Phil and all at Fireworks by Grucci. It has been a huge team effort and we look forward to many more collaborations together.”

SKYMAGIC’s Live Operations Director Chiew Soon Hooi said ” This has been a challenging but ultimately rewarding project. From a live perspective, the introduction of pyrotechnics on the drones throws up a unique set of fresh challenges, all of which the SKYMAGIC and Grucci team overcame.”

Fireworks by Grucci’s CEO Phil Grucci commented, “It has been a great pleasure to combine the unique talents of both the SKYMAGIC and Grucci teams to bring this Guinness World Record to reality. I look forward to many other opportunities to do with this team.”

ABOUT SKYMAGIC
SKYMAGIC is one of the world’s leading performance drone companies based in the United Kingdom & Singapore. We are a team of pioneers, voyagers and storytellers.  We are international. We are risk averse.

Our diverse team has over 15 years’ experience within the global entertainment industry and UAV swarm technology. We work with clients to unlock the most creative approach to telling their stories. We are flexible and collaborative.
Whether we are working within a busy show environment or taking centre stage and flying solo the story and how we help tell it remains at the heart of what we do.

Our customised fleet of dynamic, autonomously flown outdoor and indoor drones are each mounted with a super bright RGB pixel and deployed via a single ground control station across our proprietary, state-of-the-art flight software. Launched high into the night sky or within an enclosed venue, our swarm formation performance drones execute a range of stunning 3D displays and mesmerising choreographic sequences to dazzling effect.

ABOUT FIREWORKS BY GRUCCI:

Fireworks by Grucci is a sixth-generation, family-owned and operated fireworks performance company with its primary studio and corporate offices in Bellport, New York.  Known as “America’s First Family of Fireworks,” the Gruccis have transformed the night skies to the delight of millions across the globe since 1850. Phil Grucci currently serves as CEO and Creative Director of Fireworks by Grucci, Inc. and Pyrotechnique by Grucci, Inc., the manufacturing entity of the Grucci group of companies.

They are world-renowned for pyrotechnic artistry, scientific innovation and old-fashioned values. Their signature performances include eight U.S. Presidential Inaugurations, the Olympic Games in Beijing, Salt Lake City, Los Angeles, and Lake Placid; the grand opening the Atlantis Dubai and the Palm Jumeirah Island in the United Arab Emirates. Fireworks by Grucci has achieved 9 Guinness World Records: Grucci has performed throughout the Middle East for the past three decades, including large scale performances in Dubai, Ras Al Khaimah, Kingdom of Saudi Arabia.

Marjan is the leading master developer for freehold land in the Emirate of Ras Al Khaimah, offering ample development and investment opportunities with 100% foreign ownership and tax benefits. Marjan is staying true to its belief of creating vibrant communities and supporting the growth of the Emirate by developing waterfront, urban and mountain master plans. We play a vital role in the implementation of the Ras Al Khaimah government’s long-term economic plan. Through the freehold development of hospitality, commercial, residential and mixed-use projects across the Emirate, Marjan positions the Emirate as the preferred destination for investors.