RIYADH, Saudi Arabia, Nov. 10, 2019 /PRNewswire/ — A joint workshop of the Kingdom of Saudi Arabia and the Government of Yemen, entitled “The Future of Development and Reconstruction in Yemen,” kicked off Sunday morning at the headquarters of the Saudi Development and Reconstruction Program for Yemen (SDRPY) in Riyadh. In attendance are Prime Minister of Yemen Dr. Maeen Abdulmalik Saeed, SDRPY Supervisor-General Ambassador Mohammed bin Saeed Al Jabir, a number of ministerial officials of the Yemeni government, Saudi Assistant Minister for International Financial Affairs Abdul Aziz Al-Rasheed, and SDRPY personnel. At the opening, Yemeni Prime Minister Maeen Saeed explained that the Kingdom’s support through Central Bank (CBY) deposits and oil derivatives subsidies in the energy sector had been a decisive factor in moving from a negative 10% growth rate to the first positive rate of 2% in 2018, because the deposits and grant had strengthened the state budget.

The Yemeni premier added that Saudi support via the Saudi deposit to the CBY had helped strengthen the foreign exchange rate of the Yemeni currency and restore productivity and income-generating sectors. He pointed out that without this support, the rapid deterioration of the currency would not have halted, and the government would not have been able to play its proper role in economic reform. Instead, the government was able to maintain the current rate of the Yemeni rial and prevent a spiral of the inflation rate, which fell to 10%. All these indicators had been reflected on Yemeni citizens in the area of basic services.

“Throughout the course of SDRPY projects, we have worked with the Yemeni government to link the relief phase to the stage of development, reconstruction and peace-building through projects that include several vital sectors, and in various Yemeni governorates according to a strategy and vision that focuses first and foremost on the Yemeni people,” said Ambassador Al Jabir in his speech on the first day of the workshop. 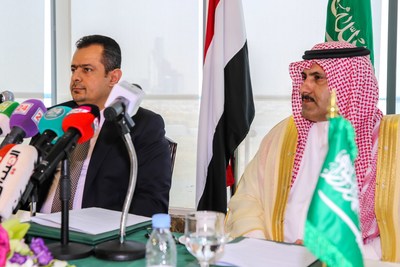 “The program also addresses Yemenis’ needs for services in a way that contributes to reducing unemployment, mobilizing the economy, and stabilizing the Yemeni currency via deposits of $3.2 billion to the Central Bank of Yemen,” noted Al Jabir. “We have also delivered oil derivatives for electricity stations, worth $180 million in installments, and to date these oil derivatives have lit the homes and shops of Yemenis and achieved constant availability of electrical power for more than 18 million beneficiaries. This has contributed effectively to the recovery of economic and social life, and it has also helped the government of Yemen to pay the salaries of public employees.”

“The program is carrying out its reconstruction and infrastructure upgrade projects in seven development sectors – health, education, transportation, water, electricity, security, and agriculture and fisheries – in coordination with the government and local authorities of Yemen,” said Ambassador Al Jabir. “These projects are also implemented in cooperation with local Yemeni companies to support the Yemeni economy and workforce.”

“As for the development path,” commented the Saudi envoy to Yemen, “the program works with partners in Yemen such as the Small and Micro Enterprise Promotion Service (SMEPS) of the Social Fund for Development (SFD) in Yemen, and international partners such as the World Bank and Islamic Development Bank, and UN agencies such as the Food and Agriculture Organization (FAO) and the World Food Programme (WFP), to design programs and initiatives to support Yemeni development, society and the economy.”

“Security and stability are essential to sustainable development, so in the short term our projects have been launched in areas free of Houthi terrorist militia control, accounting for 85% of the territory of Yemen, and this means that the program is accelerating implementation of development projects according to priorities and emergency needs in all these provinces,” said Al Jabir. “It’s worth mentioning here that the program has opened offices in a number of governorates and districts recently liberated from the Houthi militias, and which are now under the control of the legitimate Yemeni government.”

“In the stabilization process, we work with international partners and UN organizations to include stabilization and peacebuilding programs in Yemen, to link the relief phase with the transition to the development stage,” the ambassador added. “The program has also undertaken border and national security projects to support security sector reform and rehabilitation of police and local authorities, and has focused on urgent projects with sustainable solutions to achieve food security by supporting agriculture, fisheries and livestock breeding, on which more than 70% of Yemen’s population relies for its livelihood.” As for the role of the Riyadh Agreement, Al Jabir stressed that it would pave the way for a pivotal phase in Yemen, which “will be positive, God willing.”

“We’ve been keen to make SDRPY the starting point, together with our partners in the brotherly Yemeni Government, for planning the future of development and reconstruction in Yemen, which is currently a major priority in paving the way from relief to development and sustainable peace.”

He pointed out that SDRPY was now working on several specific projects which positively impact the economic and developmental spheres through the presence of several field offices in various provinces. The program is expanding and working hand in hand with the Government of the Republic of Yemen to achieve maximum benefits through the implementation of development projects and initiatives.

The workshop aims to further the development and reconstruction objectives of the Riyadh Agreement, which includes a number of economic agenda items, and to outline a general framework for the development strategy in Yemen.

SDRPY was established by royal decree of the Custodian of the Two Holy Mosques King Salman bin Abdulaziz in May 2018 to contribute, together with international donors and the World Bank, to the development and reconstruction of Yemen. SDRPY projects cover numerous different sectors (health, education, electricity and energy, agriculture and fisheries, water and dams, roads, ports, airports, and government building construction and maintenance), and the program has executive offices within Yemen which oversee and follow up on the implementation of projects and ensure the quality of work.

The program has been working closely with the Yemeni government on the implementation of various projects that have had a positive impact on the Yemeni economy, the livelihood of Yemeni citizens and job creation.