ADEN, Yemen, Jan. 2, 2020 /PRNewswire/ — The Saudi Development and Reconstruction Program for Yemen (SDRPY) launched Phase I of a project to rehabilitate and upgrade Aden International Airport today. The groundbreaking was overseen by Yemeni Prime Minister Dr. Maeen Abdulmalik Saeed, and was led by SDRPY Projects and Studies Director Eng. Hassan Alattas, with the commander of the Arab Coalition forces in Aden, Brig. Gen. Mujahid Bandar Al-Otaibi and other government officials in attendance. Aden Airport will undergo full modernization and expansion under the project. For the first time, the airport will become a non-stop, world-class hub for international and domestic flights. 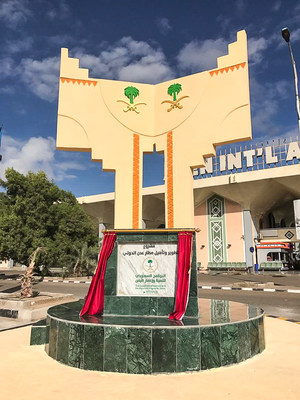 “Laying down the first building blocks of development and strategic projects for Aden International Airport will contribute significantly to raising the standards of the airport and the quality of services available to the travelers and airlines,” said Captain Saleh Salim bin Nahid, President of the General Authority for Civil Aviation and Meteorology.

“Our brothers in the Kingdom of Saudi Arabia have always made tangible marks in all aspects of life in our country, and our people will never forget their stand in Operation Decisive Storm alongside our brothers and friends,” he added. “Today we are launching a phase of development and reconstruction in various fields.”

Capt. bin Nahid also commented that “the brothers in SDRPY have previously provided various aspects of support to other airports – in Al-Ghaydah, Seiyun, Socotra and Marib – and we now find an opportunity to reiterate our thanks to the Custodian of the Two Holy Mosques King Salman bin Abdulaziz, SDRPY Supervisor Mohammad bin Saeed Al Jabir and all employees of the program for this generous support, which will have a tangible impact on the aviation sector.”

Bin Nahid concluded his speech by appealing to international airlines wishing to operate to and from Aden Airport, stressing that the airport would make every effort to facilitate their operations.

“The objective of this project is to bring Aden Airport up to International Civil Aviation Organization (ICAO) standards as quickly as possible, connect Aden directly to the countries in the region, and increase the airport’s capacity to handle much greater numbers of flights and passengers,” said Eng. Alattas.

“This will represent a new era in the airport’s history because this facility has never functioned consistently to international standards before,” he added. “Our goal is to maximize the benefits of the new air transport hub for the Yemeni people, the brothers and sisters of Saudi Arabia.”

The project will proceed in three phases. Phase I focuses on providing electricity, safety measures, and transportation. The external main gates and roads of the complex will be studied and redesigned, and passenger transport buses provided.

Phase II will consist of constructing and connecting vital service systems, such as telecommunications, navigation and air traffic control. Rehabilitation of the runway and taxi areas, gates, and tunnels connecting gates to aircraft will also be undertaken.

Phase III will focus on alignment of airport facilities and operations with ICAO standards in all areas, including safety, electricity supply, interior and exterior infrastructure, air traffic control and navigation.

Alattas expressed his hope that this project would contribute significantly to supporting the transportation sector in the sisterly Republic of Yemen, serving as an important tributary of the economy and advancing the wheel of development. He stressed that this would only be achieved through the unity of everyone in the cause of achieving the hopes and aspirations of the Yemeni people.

“We are pleased to meet at this airport in Aden, this exceptional edifice which is more than a mere economic object,” said Aden Airport Director Abdul-Raqeeb Al-Omari. “In the administration of the airport, we are witnessing the sincere and momentous support of our brothers in returning the capital, Aden, to its natural and pioneering place. With the solidarity of all, we will restore our smiling homeland to the natural position it has always known.”

The site of the airport first served as the location of Royal Air Force (RAF) Khormaksar, a British military air base, from 1917 to 1967. In the 1970s and 1980s it witnessed periodic battles during periods of instability, but by 1996 had grown to become Yemen’s second largest airport after Sana’a International, and its main terminal – built in the 1980s – was handling over a million passengers a year. Aden Airport is both the oldest air transportation hub in Yemen and also currently the most important, with the potential to generate substantial income and jobs both for the densely populated Aden Governorate and for Yemen as a whole, as trade and tax revenues naturally increase.

The outbreak of the conflict in early 2015 forced Aden Airport to close, and since July 2015, when Saudi planes delivering aid and equipment became the first aircraft to land at the airport in four months, the facility has seen only sporadic and very limited service. Aden International Airport is 6 km from the centre of Aden and currently operates 6 flights per week at very high cost, with all flights regional and none domestic. Under the project, airport capacity and the planned volume of air traffic will increase during 2020.

The groundbreaking today thus marks a historic occasion for Aden and for Yemen as a whole, as it both heralds the reopening of the country to the outside world and the added national and regional economic value generated by the project itself. The potential for regional economic development is substantial: the airport’s environs will enjoy improved roads and facilities, and the value of land in the vicinity will increase as a result of the upgraded airport.

Launch of Phase I of the project today is one item on the agenda of a SDRPY delegation visiting Aden Governorate to study conditions in a wide range of vital sectors such as education, electricity, health, transportation and water. Program staff are also monitoring ongoing projects, such as the rehabilitation Aden General Hospital and construction of its new cardiology center, funded by the Saudi Fund for Development and carried out under SDRPY supervision.

The SDRPY delegation has also met with public education officials in Aden to discuss how best to address the challenges facing the sector. Establishment of teacher training programs and of several new schools, as well as rehabilitation and restoration of existing learning centers, have been proposed. The delegation has also met with officials from the Cleaning and Improvement Fund to assess urgent requirements for handling garbage and enhancing the spirit of cooperation among community members regarding the state of school buildings, parks and public roads. 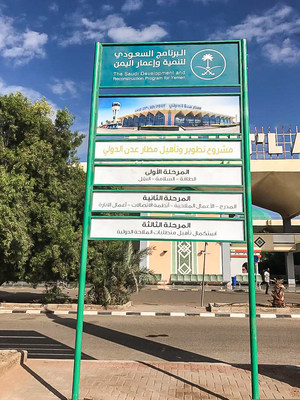