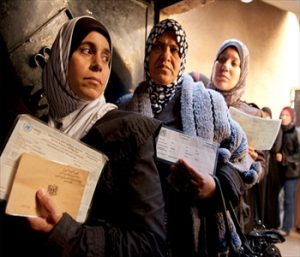 United Arab Emirates helps feed Palestinian refugees in Syria
More than 90,000 Palestinian refugee families in Syria are getting food assistance thanks to a donation from the United Arab Emirates.
The UN Refugee Agency for Palestinian Refugees (UNRWA) announced a contribution of $15 million from the UAE to help Palestinian refugee families during what it describes as “an intense humanitarian crisis.”
UNRWA said that more than half of the Palestinian refugees in Syria have left behind their savings, assets and livelihoods.
United Nations delivers 62 metric tons of humanitarian aid in Ukraine
Sixty two metric tonnes of humanitarian aid has been delivered by the United Nations to the eastern Ukrainian city of Donetsk.
The city has been badly affected by the conflict between government forces and pro-Russian separatists.
The aid includes essential hygiene items, warm clothes, blankets, condensed milk powder, drinking water and medical supplies.
Murder of child with albinism in Tanzania condemned
The murder and mutilation of a one-year old baby with albinism in northern Tanzania has been condemned by the UN High Commissioner for Human Rights.
Yohana Bahati was kidnapped from his home on Sunday by men who left his mother badly injured.
His body was found on Tuesday with his arms and legs chopped off.
Since 2000 at least 75 people with albinism have been killed in Tanzania for their body parts which are used for witchcraft.
Duration: 1’27″