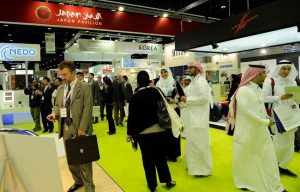 International efforts to develop clean and sustainable energy remain strong despite plummeting world oil prices, officials at last month’s 8th World Future Energy Summit affirmed.
Hosted in Abu Dhabi, the summit — the Middle East’s largest gathering on future energy and one that aims to meet the world’s energy challenges with actionable solutions — boasted the attendance of participants from across the world.
“The expectation after oil prices dropped dramatically by more than 60% was that efforts to replace fossil fuels with renewable energy would wane, but in reality these efforts are growing, which explains the unprecedented attendance at the Abu Dhabi energy summit and the large number of speakers,” said Sultan bin Ahmed Al Jaber, Minister of State and CEO of the Abu Dhabi Future Energy Company, also known as Masdar, which organised the event.
“More than 185 speakers and lecturers enriched the summit with their constructive studies and ideas,” he added.
The event, which took place January 19th-22nd, saw the launch of 69 innovations in the areas of energy efficiency, solar energy, wind energy, water treatment and waste management, with more than 210 companies from 137 countries in attendance.
The summit is the centrepiece of Abu Dhabi Sustainability Week, a global forum that brings together thought leaders, decision-makers and investors to address the challenges of renewable energy and sustainable development.
Abu Dhabi Sustainability Week also includes meetings of the general assembly of the International Renewable Energy Agency (IRENA), the International Water Summit and the ceremony to award the Zayed Future Energy Prize.
Al Jaber said the 8th World Future Energy Summit was an opportunity for these leaders, decision-makers and investors to discuss such challenges in light of the transformation of renewable energy from a high-cost option into an eminent and competitive technology.
“The world is witnessing a development that represents an opportunity to improve economies, a way to ease the burden on governments and countries, which subsidise energy [at a total cost of] $550 billion per year,” he told Al-Shorfa. “However, this can only be achieved by directing a portion of such subsidies to research and development and laying the foundation for sustainable energy.”
2015: year of innovation
The UAE in January declared 2015 a year of innovation, in an effort to encourage innovation as a strategic pillar for the stimulation of economic growth and to strengthen the country’s global competitive capabilities.
Fatima Mohammed al-Foora al-Shamsi, assistant undersecretary for electricity, clean energy and water desalination at the UAE’s Ministry of Energy, said, “The response to the input at the World Future Energy Summit heralds a promising future and helps spread this culture among peoples and countries, in particular developing countries.”
Deals worth hundreds of millions of dollars were struck among summit participants, who represented government and private sector companies from a variety of countries, she added.
Al-Shamsi spoke to Emirati efforts to address climate changes under relevant UN agreements.
Concerned state agencies are making concerted efforts to collect “accurate and comprehensive data to compute greenhouse gas emissions and subsequently share the data and computation results with local partners so as to contribute to the development of effective programmes and initiatives to reduce emissions in various sectors”, she said.
IRENA director-general Adnan Amin said the UAE is committed to providing soft loans totalling $350 million over seven years to finance renewable energy projects in developing countries.
Funding sustainable energy projects
The Abu Dhabi Fund for Development in co-operation with IRENA during the summit provided $57 million in soft loans to finance renewable energy projects in Argentina, Iran, Cuba, Mauritania and the Saint Vincent and Grenadines islands, to join a first group of countries that previously received such loans, including Ecuador, the Maldives, Mali, Mauritania, the Samoa Islands and Sierra Leone.
“Projects funded by the agency and the Abu Dhabi Fund for Development are selected based on specific criteria,” Amin said. “They must be creative, unique, reproducible and replicable in other areas, and of course, they must align with the development strategies and priorities of the governments in the countries where the projects are to be implemented.”
Researchers are currently studying and evaluating the advantages and socio-economic effects of these projects, he said, adding, “The aim of these projects is to contribute to the development of sustainable energy sources and to enhance energy security.”