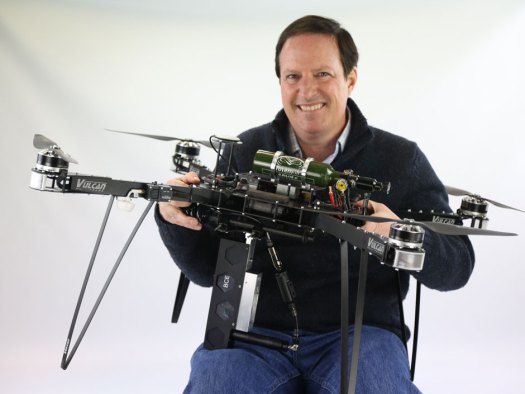 A flurry of revving miniaturized engines and humming propellers have kicked off the “World Cup of Drones” in Dubai. The United Arab Emirates, neighbour to countries where drones are more associated with military airstrikes than benign hobbyists, wants to rebrand the controversial technology in the first Drones for Good competition.
Over 800 drone enthusiasts and robotics firms from around the world have entered the government-sponsored contest with commercial use for drones in public health, agriculture, town planning, logistics and the environment.

Judges had narrowed the field to 19 semi-finalists, whose machines have been buzzing over the palms of Dubai’s Internet City, an exotic locale where the white robes of the desert culture mingle with the horn-rimmed glasses of the engineers.
Among the finalists from the UAE, Saudi Arabia, Germany, Spain, the U.K., U.S., Switzerland, Kenya and New Zealand is Calgary start-up 4Front Robotics, who’s presenting a search-and-rescue UAV, the only Canadian design to make it through to the final round.
“Over the years people have been having this connotation that drones are bad and used for [negative] kinds of activities,” the company’s founder and CEO, Alex Ramirez-Serrano, said in an interview. “These machines … have great potential to improve human life and the quality of life that people have here on the planet.”
[embedded content]
Mr. Ramirez-Serrano has been a tech geek since he first saw Star Wars in the Seventies. Now dividing his time between the robotics firm he founded in 2012 and the University of Calgary, where he is a professor of mechanical engineering, Mr. Ramirez-Serrano wants people to see drones as more than just military hardware. He expects his UAVs to hit the market by the end of this year.
The commercial aspect of the drone industry, till now the purview of the military and hobbyists, is quietly starting to take flight. The sector will grow worldwide from a paltry US$72.5 million in 2015, to nearly US$1.1 billion in 2023, according to aerospace and defense analyst, the Teal Group Corp.
Handout/BioCarbon Engineering British company BioCarbon Engineering is attempting to counter deforestation with drones. Lauren Fletcher, CEO of BioCarbon Engineering, holds the company’s drone.

While Phillip Finnegan, director of corporate analysis at the Teal Group, doesn’t think the market for commercial drones will be anywhere near the size of the military one in the near future, he does see it “growing very rapidly as airspace opens worldwide.”
“Companies are still developing understanding of what the potential applications are that are commercially viable,” he said in an interview.
As competitors demonstrate their drones in Dubai – anything from small whirring copters to large fixed-wing aircraft – they are no doubt focused on the US$1 million cash prize, as well as the keen interest of large aerospace corporations, looking for the next innovative technology.
The Drones for Good campaign has attracted participants showcasing machines in a number of do-gooding categories.
4Front Robotics’  UAV, a twin-propeller, carbon-fibre and titanium prototype is assembled with as many off-the-shelf components as possible, but remains nearly 80% custom-made. It’s designed for reconnaissance in the event of fire, collapsed buildings, mines, or other urban and industrial entrapments.
“It takes [rescuers] five to eight hours just to determine it’s safe for them to go inside,” Mr. Ramirez-Serrano said. “When saving lives, minutes count.” Because of its high maneuverability, the drone, about the size of a shoebox, is able to enter a small space and navigate narrow hallways, locate victims and check for vital signs. The drone won’t speed up the assessment process, but it will allow responders to perform pinpoint rescues once they’ve determined it’s safe.
The Canadian team is not the only entrant looking to make disaster relief quicker and safer. FalconViz, a Saudi Arabian company, aims to map disaster areas using UAVs to drop thermal sensors that scan for signs of life. Similarly, Flyability, a Swiss start-up, has created a drone with a protective cage able to navigate unknown areas. The UAV can collide with objects, including walls, without destabilizing and crashing. The company says the drone is safe to fly in crowded places, something a fraction of today’s drones are able to do.
[embedded content]
Environmentally-minded drones are also on display in Dubai. BioCarbon Engineering, a British team, hopes to use drones to counter deforestation. Their design maps forests and is able to plant new trees using “seed pods” dropped by its UAV.  Spanish company, HEMAV, has set its sights on patrolling wildlife preserves. Its drone can detect poachers and return their coordinates to rangers, who can then swing into action.
A Munich-based start-up, Quantum Systems, has designed a model that surveys farmland, enabling farmers to optimize watering and spot diseased areas. Its drone is capable of taking off vertically like a copter, and then tilting its propellers to fly as a typical fixed-wing aircraft, like a Harrier jet. The technology can also be used for humanitarian aid, disaster relief and logistic purposes.
Eliminating landmines is also on the agenda. Cat-UAV, a Spanish company, has designed a drone that uses sensors to detect the underground explosives. While current demining methods use metal detectors, animals and ground vehicles, all are slow and dangerous processes. Cat-UAV thinks its technology could revolutionize how war zones are converted back to habitable locales.
Regardless of who takes home the prize in Dubai, Mr. Ramirez-Serrano is confident about the commercial drone industry’s future. “The technology’s maturing,” he said. “People are finding more uses and the regulations are being put in place to be able to use these devices. So I think in the near future, we’re going to see these drones being used on a regular basis.”
The winner is announced Saturday, Feb. 7.

Dubai alive with colour and festivities for 47th National Day