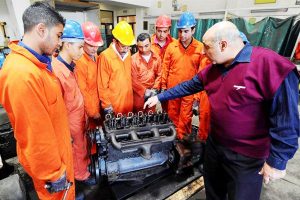 The government launched a new national plan this week to provide training for job-seekers and help them meet the labour market’s needs.The plan brings together the many initiatives that have been launched in bids to lower the unemployment rate by improving the skills of newcomers to the job market, according to Nahed Al-Ashri, minister of manpower and immigration.The minister said the idea is to integrate the initiatives of different ministries and institutions in a national plan that has an accurate database of the labour market. This will include a breakdown of unemployment rates according to age, level of education, skills and gender with a view to more efficient results, she said.
Egypt’s unemployment rate currently stands at 13 per cent of the labour force, representing more than three million individuals. The new initiative aims to help increase demand for Egyptian labour both in the domestic and foreign markets.
The government plan seeks to give training to approximately 750,000 people a year who want to work in Egypt. A further 850,000 people will be prepared to work abroad in a number of both traditional and new markets in Africa, Eastern Europe and Asia.
“I had no idea that the government was offering training courses. When I finished my studies in engineering, I went to a private-sector company to ask for training for three months to improve my skills before getting a job,” said Kareem Mahmoud, a graduate of a private university.
Mahmoud said he had his doubts about the credibility and efficiency of the government programmes.
Alyia Al-Mahdi, a professor of economics at Cairo University, said that training is essential to joining the labour market and that it should be included as part of the education system and not acquired after graduation.
“The way funds are allocated to provide training to new graduates to help them get jobs is strange. I have never seen this in any other country,” Al-Mahdi said. “These funds should be directed at upgrading the education system to help graduates meet the market’s needs.”
If training after graduation is necessary, it should be in cooperation with factories and companies, she added, suggesting that the government provide funds to factories, companies and other employers to help them provide training for a number of graduates annually.
“A group of factories or companies in one sector could establish their own specialised training centre in the field to offer technical training for newcomers, because the existing training centres need either to be restructured or managed by the private sector,” she said.
She said the performance of the 800 public training centres throughout the country needs to be improved and redirected to offer what the labour market really needs. A survey conducted by the ministry of its own training centres in 24 governorates revealed that they provide training that does not meet labour-market needs in these governorates.
Abdel-Fattah Ibrahim, deputy chairman of the Egyptian Trade Union (ETU), told the Weekly that training programmes would remain important as long as there is no change in the education system.
Such programmes help provide new job-seekers with the knowledge and skills they did not acquire through traditional or vocational education, Ibrahim said.
But he called for a strategy to coordinate education policies and training programmes with current and future labour-market needs, together with national development plans and investment projects.
One recently revealed initiative that would come under the umbrella of the national plan is Training for Employment, launched in January by the Industrial Training Council (ITC), an affiliate of the Ministry of Industry in cooperation with the United Arab Emirates.
This initiative, known as Bee’dak, or “In your own hands,” includes four phases during which 100,000 participants will receive training for jobs in different productive and industrial sectors. The first phase of the programme started in January and will last for six months.
The initiative, which will cost LE5 million, is wholly funded by the UAE and will put participants in direct contact with factories and companies where they can find job opportunities. It will focus on providing specialised training in the industrial sector and will be applied in 15 governorates.

Bezant Hits Pre-Sale Target in One Hour, Oversubscribed by 7.5 times as Asia’s Fastest Token Sale in 2018