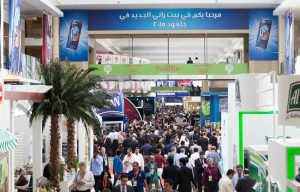 Visitors and companyrepresentatives from around the worldpack the walkways atGulfood 2015, billed as the world’s biggest annual food and hospitality show. The trade fair, held in Dubai,concluded February 12th. [Ayman Mohamed/Al-Shorfa]

A number of Arab and international restaurant and food product companies have announced plans to expand into the Gulf and Middle East markets using the franchise system, with Dubai serving as a regional hub.
Corporate officials who took part in Gulfood 2015, a huge annual food and hospitality show which concluded in Dubai on February 12th, said they put forward action plans to open new branches in the region from bases in Dubai.
These business plans seek to capitalise on Dubai’s position as a regional hub for business and for the trade and re-export of food, they said.
The franchise market, or exclusive brand name usage rights, is worth an estimated 110 billion dirhams ($30 billion) in the Middle East, according to a study of market indicators released by the Franchise Middle East Consultancy.
Doner Kebab Franchise Holdings, a Germany-based company, recently announced plans to expand through the franchise system from Dubai throughout the Gulf and the Middle East.
The move comes as part of a plan to open 100 branches in various Gulf countries by the end of 2020, said chief executive officer Farshad Abbaszadeh.
“The company is using Dubai as base to expand its brand because of the high growth rate in the food, beverage and hospitality sector in the UAE in general,” he told Al-Shorfa. “Hence, we expect further growth owing to the high tourism activity in the UAE and high spending rates of residents.”
Dubai restaurant company franchise director Pankaj Gulati said the emirate offers facilitated procedures for operating a franchise system, including ease of import and export.
There is ready demand for the franchise operation system in the UAE and the Gulf, backed by the growth in tourism activity, Gulati said.
‘Significant growth’
“Dubai’s markets witnessed significant growth over the past period in the number of franchise-based restaurant and food companies,” said Khaled al-Zoghbi, director of a plant that supplies processed meat products.
Al-Zoghbi said his company has been monitoring this growth, as it imports raw materials for restaurants that operate under the franchise system.
Imports for franchise restaurants saw an increase in the latter part of last year, he added, which has continued into the beginning of this year.
“The announcements of expansions from Dubai by Arab and international companies are attributable to the environment that is conducive to the flourishing of restaurants that operate under this system and the advantage of using the UAE as a regional hub for food business and trade,” he said.
Companies are drawn to this system in the UAE due to the ease of obtaining, trading and re-exporting food materials to and from various world markets, he added.
“This is useful in helping companies obtain special production materials,” he said, adding that franchise-based restaurants must adhere to specific standards in preparing their meals, and for this reason face difficulties in obtaining the appropriate production materials in some markets.
This is a key factor in attracting these businesses to Dubai, he said, where these materials are easily obtainable.

PCB alone responsible for such team performances (The Nation (Pakistan))