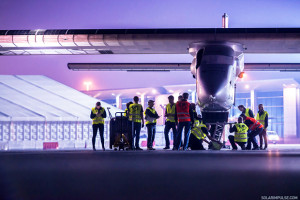 We can watch the departure and landing of the first leg of the historic  First Round-The-World Solar Flight live. And while we’re waiting for Solar Impulse 2 to take off, we can catch the first full broadcast from SiTV, based in Monaco’s Mission Control Centre in the video below.
Bertrand Piccard said via Twitter: “After 12 years of preparation, the RTW is happening! With Andre Borschberg, we have butterflies in the stomach.”
http://youtu.be/eq7wdyp_Xvw
SOLAR IMPULSE says: Solar Impulse 2 will take off for its first flight from Abu Dhabi (Al Bateen Executive Airport, AZI/OMAD) in the United Arab Emirates, to Muscat (Muscat International Airport, MCT/OOMS) in the Sultanate of Oman. Andre Borschberg will fly the zero-fuel airplane on about 400km (215NM, 248.5 miles) for an estimated time of 12 hours.

Andre Borschberg says on Twitter: “All the technologies we have onboard Solar Impulse can be used on the ground futureisclean.org.”

SOLAR IMPULSE says: Solar Impulse 2 will land into Muscat International Airport, MCT/OOMS in the Sultanate of Oman, completing the longest flight of Si2 to date. Pilot André Borschberg will wait until the sun sets and the ground-level turbulence is reduced before landing for a pit-stop, with the controls soon handed over to Bertrand Piccard for the second flight to Ahmedabad, India.

One day before the world’s most famous solar airplane departed Abu Dhabi, Solar Impulse 2 launched the #FutureIsClean movement to gather worldwide support for the use of clean energy.
Keep up on clean energy news & inspiration with our free weekly newsletter!

Pilots and co-founders of Solar Impulse, Bertrand Piccard and André Borschberg, were joined by H.S.H. Prince Albert II of Monaco, His Excellency Dr. Sultan Al Jaber of the UAE and Richard Branson to launch the movement  #FUTUREISCLEAN. If you missed the news about the launch, you can catch it here.

Bertrand Piccard continued via Twitter: “We need to make 2015 the year where we stop damaging our planet. Future is now. Future is you.  futureisclean.org.”
Andre Borschberg added on Twitter: “What Bertrand Piccard & I feel today is a mix of childish excitement and sense of responsibility.”
Photo Credit: Solar Impulse 2, RTW First Test Flight Abu Dhabi, Stefatou 26 via Solar Impulse 2
You may also want to check out:  André Borschberg to Fly 1st Leg of Solar Impulse 2 RTW-VIDEO
By Amber Archangel

Nazarbayev calls on UAE businesses to increase investments in Kazakhstan

A deepening relationship with Beijing (The Statesman (Pakistan))