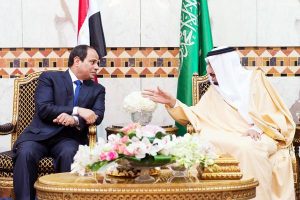 Al-Sisi during a meeting with King Salman
President Al-Sisi’s succinct and unequivocal answers to three questions put to him by the London-based Sharq Al-Awsat newspaper on the eve of his visit to Saudi Arabia last week delineate Egypt’s ambition to create an Arab antiterrorist force.The first question concerned how to combat the terrorist Islamic State (IS) group. “The answer to that question is: through our unity,” Al-Sisi responded. “This I regard as the first step toward the elimination of terrorism. By unity I mean comprehensive coordination and cooperation in all domains.
“I believe security and political plans cannot be restricted to military and security actions but must include promoting strong unified measures that will also serve as a deterrent factor in the region.
“We have the ability to forge a remarkable force and to deliver a strong message that will confirm to all ill-intentioned parties that it will be impossible to harm us when we stand together, and that terrorists can only wreak harm when we are disunited.”
The second question was: “Do you mean an Arab military force to fight terrorism?”
Al-Sisi answered: “We need collective action, by which I mean a joint Arab role, not Saudi Arabia, Egypt or the UAE acting independently. Egypt is not looking for a role. We are seeking an Arab security arrangement characterised by strength in the face of threats and challenges.”
The third question was, “Is there a specific project in this regard?” Al-Sisi’s answer: “We are consulting with our brother Arabs on ways to create a joint Arab force.”
Al-Sisi’s speeches that have broached the subject make it clear five Arab countries — the UAE, Saudi Arabia, Bahrain, Kuwait and Jordan — support the Egyptian drive to create a united Arab force.
President Al-Sisi met with Arab League Secretary-General Nabil Al-Arabi to discuss arrangements for the Arab summit Egypt is scheduled to host at the end of this month. According to statements issued by Al-Arabi, forming a joint Arab force will be on the summit agenda.
At a recent press conference Al-Arabi said he intends to hold consultations with Arab leaders and the summit chairman, as well as that of the next summit round, on the need for an united force to safeguard Arab national security and confront terrorism and other threats against the region.
“The current situation does not demand a conventional war force but a comprehensive approach to confronting the terrorist groups that are threatening Arab peace and security,” said Al-Arabi.
To forge any agreement over a joint force, Al-Arabi argues, will require a joint meeting of ministers of defence and foreign affairs, and possibly of ministers of interior and information.
“Everyone must work together,” he stressed, “because terrorism exists in the Mashraq and the Maghrab. We must focus on two essentials: to repel dangers and protect Arab national security.
“There can be no disputes over the need to exchange intelligence and contribute funds. If there is to be any dispute it should be over whether or not to use military force, a question that has to be decided on a case-by-case basis.”
Six countries signed the 1950 Arab Joint Defence and Economic Cooperation Treaty — Egypt, Saudi Arabia, Syria, Iraq, Lebanon and Yemen. Al-Arabi sees this as a positive precedent. But what he does not envisage is the creation of a standing army under joint command.
“Wars against terrorism are more in the nature of wars against professional criminal gangs. These do not require armies in a conventional sense but the exchange of intelligence and cooperation over limited military action.”
Military expert General Ahmed Abdel Halim argues, “Ultimately, it all boils down to whether the Arab political wills exist to translate the Egyptian outlook into reality.”
He does not take much heart from the earlier precedents. Any joint Arab force will presumably be forged within the context of the joint defence agreement of 1950, though taking into account recent circumstances and developments.
To do nothing, says General Talaat Mousa, military advisor to the Nasser Military Academy, is to court grave danger for the Arab world. “We need to act now,” he told the Weekly, warning that delays in implementing the 1950 agreement, which was only put into effect in 1962, cannot be repeated.
But what of the American and other Western military bases in the region, especially in the Gulf? There are bases in Qatar, Bahrain, Saudi Arabia, Kuwait and the UAE. These countries’ agendas therefore intersect with the Western agenda and Washington remains the chief supplier of arms to Gulf states.
Can these countries, which are dependent for their security on the West, create a defence force outside that framework?
“The Western presence in the Gulf does not impact greatly on the joint Arab project. It is a result of bilateral agreements,” says Moussa. “Arab differences present a more serious problem.
“Arab countries do not see eye to eye on how to deal with the situation in Syria or in Libya. That could derail any joint Arab defence agreement, draining it of the political will necessary to confront major issues in the region.”
The Arab League’s legacy, too, offers little hope. The idea of a joint Arab force has been brought before it on numerous occasions but inter-Arab differences have always stood in the way of any progress.
General Sameh Seif Al-Yazal, director of the National Centre for Security Studies, believes any force must be created outside the framework of the Arab League and must refrain from taking offensive action against any Arab state.
It is difficult, says Al-Yazal, to envision any joint Arab force intervening in, say, Yemen, even though the country is on the verge of civil war.