BEIJING, April 14, 2022 /PRNewswire/ — From a herd of China’s wandering Asian elephants to the 15th Conference of the Parties (COP15) to the Convention on Biological Diversity held in Kunming, southwest China’s Yunnan Province, topics related to ecological civilization in the country are attracting more and more attention. 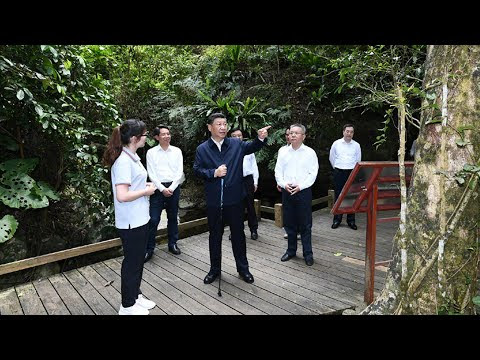 Hainan is a province of ecological resources and the work of building the Hainan Tropical Rainforest National Park is top priority, he said when visiting a section of the park on Monday.

The Hainan Tropical Rainforest National Park boasts one of the most concentrated, best preserved and largest contiguous tropical rainforests in China. The park covers nine cities and counties, with a total area of 4,400 square km, or about one-seventh of Hainan Island’s land area.

It is an important part of the world’s tropical rainforest and a key area for biodiversity conservation in the country.

Learning about efforts to protect the environment and biodiversity in the park, Xi highlighted the need to fully understand the strategic significance of Hainan’s national park development to the country, and urged continuous and solid efforts in this regard.

Last year, the Chinese leader announced the official designation of the country’s first group of national parks when delivering a keynote speech via video link at the leaders’ summit of the COP15. The Hainan Tropical Rainforest National Park is one of them.

In recent years, Hainan has promoted the construction of the park, strengthening the restoration of tropical rainforest and carrying out ecological relocation projects in core protected areas.

In late March, researchers discovered eight new macrofungi species in the park. These can decompose cellulose and lignin and play a significant decomposition role in the tropical rainforest ecosystem.

Over the years, Xi has stressed advancing ecological civilization on many occasions. “Lucid waters and lush mountains are invaluable assets,” the frequently-quoted words by Xi, have been a key component of his thoughts on ecological progress.

The country has also announced that it will strive to peak carbon dioxide emissions by 2030 and achieve carbon neutrality by 2060, which means it will complete the world’s largest reduction in carbon emission intensity, and realize carbon neutrality from carbon peaking in the shortest time in global history.

How does China’s people-centric approach work?