BEIJING, Nov. 3, 2022 /PRNewswire/ — The 5th China International Import Expo (CIIE), which will be held on November 5 to 10 in Shanghai, is set to welcome major companies from across the globe. 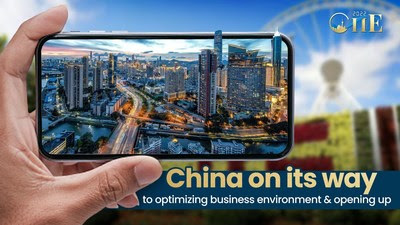 Over 280 of the world’s top 500 enterprises and industry giants will participate in the event, among which nearly 90 percent are returning participants from last year, according to the CIIE Bureau and General Administration of Customs.

Since 2018, the annual fair has served as an open channel for international investment and procurement, part of China’s drive to open its market to the world.

“Promoting high-standard opening up” is stressed in a report to the 20th National Congress of the CPC, which said China should “steadily expand institutional opening up with regard to rules, regulations, management, and standards.”

Exhibitors at the four previous events launched more than 1,500 new products, technologies, service items and clinched tentative deals worth more than $270 billion, according to the Ministry of Commerce.

Many high-tech products will make a debut, including Tesla’s humanoid robot Optimus which applies powerful computer vision technology consistent with cars, as well as photosensitive resin 3D printers by Evonik Industries AG, which are suitable for making tough and impact-resistant materials.

CIIE opens up opportunities for companies around the globe to tap into the Chinese market, which is growing rapidly as a result of rising incomes and greater purchasing power of Chinese consumers.

The growing purchasing power indicates the potential of the Chinese market, which companies, whether big-name multinationals or small start-ups, can access.

Over the same period, China’s actual use of foreign investment increased by nearly 63 percent. More than 47,000 enterprises had been established with foreign direct investment (excluding banking, securities and insurance), up by 23.5 percent on the previous year, official data shows.

Over the past few years, China has witnessed an improvement in its business environment by improving market regulation services. In a World Bank report in 2020 on the ease of doing business, China ranked 31 out of 190 countries and regions, up from 78th in 2018.

In 2019, China issued the Regulation on Optimizing Business Environment, the first official document that clarified the correlation between the protection of intellectual property rights and the business environment.

Within the regulation, domestic investors and market entities are protected and foreign individuals and corporations can also get a valid patent or a trademark from the China IP administrative offices if they meet the statutory rules in intellectual property law.

In 2021, six economically developed cities were selected to take the lead in developing an international consumption center. The government also released a new guideline in 2022 to ease strains on small businesses and protect the legitimate rights of market entities.

Since the Foreign Investment Law was implemented in 2020, China has taken measures to encourage foreign investment and promote opening-up at a higher level, including easing market access for trade in services and investment and increasing the proportion of trades in goods with zero tariffs.

So far, China has signed 19 free trade agreements with 26 countries and regions, and the trade volume between China and its free trade partners takes up around 35 percent of the country’s total foreign trade, official data shows.

China introduced its first negative list for foreign investment, which refers to a document that delineates industries that are prohibited or restricted to private investment by companies, back in 2017.

The latest version of the negative list, released in 2021, reduced the number of restrictive measures from 33 to 31 and for the free trade zones from 30 to 27. The shortened list is part of China’s efforts to facilitate a higher degree of opening up to attract foreign investment.

“Over the past decade, China has made full use of the domestic and overseas markets and resources therein to expand its foreign trade and economic cooperation … and create a new paradigm of opening-up to the outside world,” said Chen Jian’an, vice chairman of the China Council for the Promotion of International Trade to CGTN.

The hosting of major exhibitions like CIIE demonstrates China’s initiative to open its market to the world, he added.