Located in the southern city of Amin, the plant will be commissioned by the end of 2019 and will power Petroleum Development Oman’s interior operations by using Arctech’s SkySmart tracking system. The solar plant not only marks the first of its kind in Oman and the world’s first utility-scale solar project with an oil and gas company as the sole wholesale buyer of electricity, but also being the single-largest tracking system project with bifacial modules in Middle East to date. 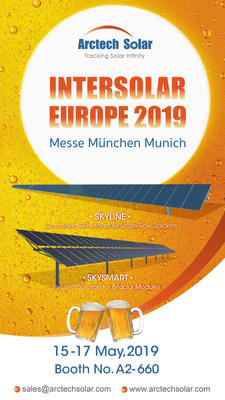 “We are delighted to make an effort to this landmark solar project in Oman,” said Mr. Guy Rong, President of Arctech Solar’s international business. “To date, Arctech has already supplied almost 700MW of SkySmart trackers for projects across the globe, including in Spain, Mexico and Australia, which demonstrates our ability to scale and innovate with our customers in new markets massively. We will remain committed to providing efficient solar tracking and racking systems in support of the Middle East’s rapid development and potential for renewable energy.”

With its innovative structural design that effectively reduces module backside standing and its efficient factory pre-assembly, Arctech’s SkySmart tracking system will be deployed on the project to offer higher energy output, while also reducing the labor cost associated with field installation.

The plant will be Arctech’s second project in the Middle East, following a solar power plant project in Saudi Arabia, and is part of the manufacturer’s ongoing internationalization strategy. The deal comes off the back of Arctech’s ranking fourth globally for market share among solar PV tracker suppliers, according to the Global Solar PV Tracker Market Shares and Shipment Trends Report 2019, released by Wood Mackenzie Power & Renewables.

In addition to supplying trackers for the plant, Arctech will continue to accelerate its global presence in 2019 and beyond through increased trade show participation, as part of the company’s dedication to bringing clean energy to the world.

Arctech Solar is constantly moving higher with the rise in the technological innovation and new technology application, except the above-mentioned SkySmart tracking system, Skyline tracking system is another competitive product of Arctech’s sky series solar tracking and racking systems. In the coming Intersolar Europe exhibition 2019, Skyline will be exhibiting at booth A2-660 from 15 to 17 May. We sincerely invite you to visit our booth!

Arctech Solar is one of the world’s leading manufacturers and solution providers of solar tracking and racking systems. In the past decade, Arctech Solar has successfully set up overseas subsidiaries/service centers in the US, India, Japan, Spain, Mexico, Australia and UAE. As of the end of 2018, Arctech has cumulatively installed approximately 19GW capacity and completed 900 projects in 24 countries, and is now recognized as a reliable partner in the global PV tracking and racking industry. For more information, please visit www.arctechsolar.com

CGTN: What does a people-centered philosophy mean for China?