At the signing ceremony, Dr. Amr S. Talaat, the Minister of EMCIT, H.E. Mohamed Elbadri, the Ambassador of Egypt to China, and H.E. Liao Liqiang, the Ambassador of China to Egypt, all delivered remarks on the innovative cooperation between the two countries. After the remarks concluded, Ahmed Tantawy, the Executive Director of Applied Innovation Center (AIC) of EMCIT, Dr. Hu Yu, the Executive President of iFLYTEK, and Dr. Liu Junhua, the Deputy Director of iFLYTEK AI Research Institute, all spoke briefly about the agreement. Mr. Duan Dawei, the Senior Vice President and CFO of iFLYTEK, as well as other guests, attended the ceremony.

Building a Bridge Between China and Egypt

As ancient countries with long histories and splendid cultures, China and Egypt have made significant contributions to the dissemination of human knowledge and science. At the signing ceremony, Dr. Amr S. Talaat, the Minister of EMCIT, spoke about the significance of using translation software to increase the exchange and distribution of knowledge and science, a practice that will be extended and amplified to promote the economic development of both China and Egypt. He concluded by saying that he looks forward to strengthening Egypt’s scientific and technological cooperation with China.

“Egypt is the first African country to establish diplomatic relations with China. China and Egypt have established a comprehensive strategic partnership over the past 64 years,” said Mr. Liao Liqiang, the Ambassador of China to Egypt. He explained that this cooperation helps to build a bridge of communication, friendship, and international rejuvenation for a quarter of the world’s population. Mr. Liao Liqiang emphasized that the China-Egypt relationship is taking solid steps toward building a strong relationship with the Arab world and other African countries.

In his speech, Dr. Hu Yu, the Executive President of iFLYTEK, pointed out that the cooperation presents iFLYTEK with a great opportunity to learn about Middle Eastern and African markets. After the Chinese-Arabic language system is complete, users will be able to use iFLYTEK’s AI products. Dr. Hu Yu added that iFLYTEK plans to fully support the research on Arabic speech synthesis, speech recognition, and machine translation. 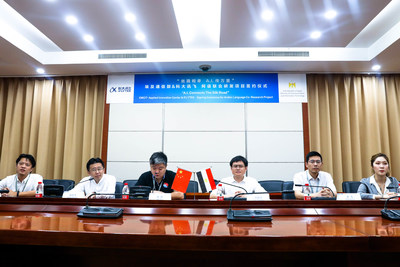 Nothing can separate people who share the same vision. Before the signing ceremony, iFLYTEK had been in close contact with EMCIT in AI-related fields to explore cooperation opportunities. In August 2009, iFLYTEK signed a memorandum with EMCIT, and the prospects for cooperation between the two sides are now clear under the strategic framework.

The Egyptian government has started the implementation of AI strategy and is committed to cultivating the technical skills of young citizens as well as a new generation of AI researchers and experts. Additionally, the government continuously promotes the application and development of artificial and cognitive intelligence in various fields. As one of the representative AI enterprises in China, iFLYTEK actively works toward its goal to “Create a Better World with AI,” ensuring that multilingual technology research is one of its top priorities.

After more than a year of discussions, Dr. Liu Junhua, the Deputy Director of iFLYTEK AI Research Institute, his team, and Ms. Fan Luting, the Regional Manager of Eastern Europe and the coordinator of this project, drafted and signed the research project agreement with the AIC. This agreement focuses on Arabic speech recognition, speech synthesis, and Chinese-Arabic translation and outlines six milestones to reach within the next three years, defining the responsibility divisions between the two parties. Throughout the next three years, the two parties will work together and develop a high performing Chinese-Arabic Speech Translation System to provide automatic translation services for the increasing demand for Chinese-Arabic bidirectional conversations and promote closer cooperation.

Working Together to Advance Economic Cooperation

The signing of the cooperation agreement represents an important aspect of the global infrastructure development strategy, the Belt and Road Initiative, to advance economic cooperation.

On July 6, the 9th ministerial meeting of the China-Arab States Cooperation Forum occurred. The meeting noted that under the current circumstances, it is crucial that China and the Arab world strengthen their cooperation and move forward together. Taking this meeting as an opportunity, the two sides revamped their strategic communication, coordination and steadily advanced their collaboration in various fields such as pandemic prevention and the improvement of the economic partnership between China and Arab countries.

As a member of the AI national team, iFLYTEK actively promotes the construction of the Speech Silk Road. iFLYTEK is committed to providing Arabic language editions of commercial products and solutions to Egypt to improve China’s research of Arabic and to promote economic and trade partnerships along the Belt and Road.

Trying to accomplish something alone can be difficult, but working together makes it easier to achieve mutual goals. With an inclusive attitude, iFLYTEK will continue to actively carry out international cooperation to create a better world for all mankind.

The ALDO Group pursues its commitment towards climate action

If You Were Injured By A Malfunctioning Takata Airbag, You May Still Be Eligible For Compensation Through The Special Master’s And Trustee’s Claim Process For Personal Injuries Or Wrongful Death.